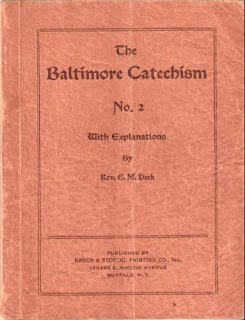 Matthew 5:23-24 Si ergo offers munus tuum ad altare ebi recordatus fueris quia frater tuus habet aliquid adversum te, relinque ibi munus tuum ante altare, et vade prius reconciliari fratri tuo, et tunc veniens offeres manus tuum; Therefore if thou bring thy gift to the altar and there shalt remember that thy brother hath anything against thee, leave there thy gift before the altar, and go first to be reconciled to thy brother, and then come and offer thy gift.

I have in my possession a copy of a little book entitled The Baltimore Catechism No. 2 with explanations by Rev. E.M. Deck, printed by the Rauch & Stoeckl Printing Co., Inc. from Buffalo, N.Y. It has a copyright of 1929 and remained in print until the 1970’s. It was a series based on the catechism issued by the American Catholic bishops during their plenary council held in Baltimore, Maryland in the 19th century, the same one that promoted catholic schools. It was later revised in the 1940’s and has never been replaced with an official catechism for children, though the bishops currently have one for adults based on the Catechism of the Catholic Church, first published in Rome about twenty years ago. During this Year of Faith Pope Benedict XVI recommended that we read and study the Church’s official catechism. That is a grand idea, because many are confused about what is and what is not authentic Catholic doctrine. It can readily be said that if a teaching contradicts or undermines a teaching set forth clearly in the Church’s official catechism than that teaching is not genuinely catholic. It becomes a counterfeit -catholic position, and thus not catholic at all. This advice was given by Pope Benedict XVI to seminarians and priests. 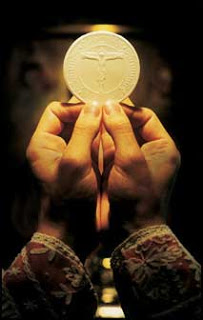 The gospel teaches us to love. In order to love as the Lord loves us we need many holy communions, the Sacrament of Love. To make best use of Holy Communion our souls must be pure, filled with “ardent love.” Frequent confessions are important in making the best out of the Holy Eucharist. The Gospel read at the Traditional Latin Mass this Sunday reminds us of this obligation to be holy in our encounters with the holy of holies. Of course, the end result is to be a better Catholic. Let us do our part to cooperate with the Triumph of Love in the Most Sacred Heart of Jesus. His love endureth forever and ever.