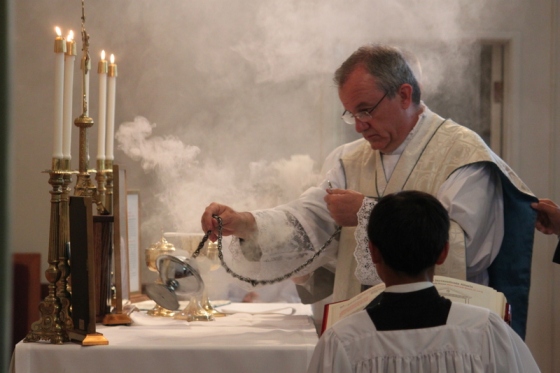 ** Posted with permission from Fr. Keyes**

People often say I am taking people backward to Pre-Vatican II. People often say that the parishioners cannot understand the Latin. I am am sure that a stranger who has never been at a Mass in Latin may feel a little lost, but a parishioner who attends and participates in Mass over a long time understands the liturgy deeply.

I am of the opinion that a Catholic who is a Disciple of Jesus, and has a relationship with Him learns how to participate in the Extraordinary Form of the Mass, they will be able to participate more completely in the Ordinary Form.

A parishioner recently told me that people seem more engaged at the Solemn Mass than at other Masses at the parish. Yes, we have been at it for nine years, but this congregation of multiple languages and cultures sings the Kyrie, the Gloria, the Sanctus, and the Pater Noster by heart, just like Paul VI asked for. And they are learning to sing the Credo. The Propers and the Ordinary are in Latin (and greek), but the Mass is celebrated in English. Vatican II gave us more opportunity to use the Vernacular, but it did not dispense with the Latin. A Catholic who does not know some of the Latin Parts of the Mass as outlined in Pope Paul’s letter in 1974 is truly an impoverished Catholic.

It is the priests and the professionals who tell me that people hate this. If only the people would stop telling me that they love it.

One thought on “Fr. Jeffrey Keyes on Latin in the Liturgy!”