The Arms of the Traditional Latin Mass Society of San Francisco

designed and delineated by Matthew Alderman 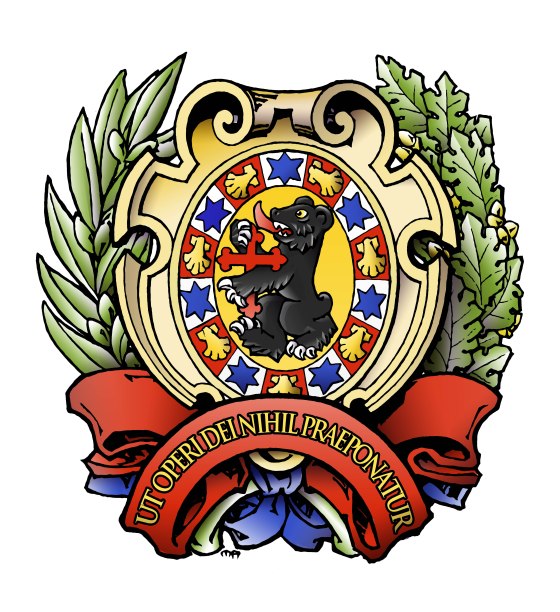 Blazon: Or, a bear rampant sable, languered gules and armed argent, holding in the forepaws a Latin cross fleury gules, all within a bordure compony gules and argent, the pieces gules charged each with an escallop or and the pieces argent with a mullet of six points azure.

Motto: “Ut Operi Dei nihil praeponatur” taken from the Rule of St. Benedict which translates to “Let nothing be given precedence over God’s work”

The arms may be shown with the decorative additions of an olive bough to the sinister and an oak bough to the dexter, all proper.

Description in Modern English: On a gold background is shown a black bear standing upright holding a red cross between its paws with the arms terminating in floriated ends. The bear’s teeth and claws are white (or silver) and his tongue is red. A border divided into alternating red and white pieces surrounds the entire shield, each piece depicting, respectively, a gold escallop shell or a blue six-pointed star.

Symbolism: The central charge of the arms, the bear, refers both to the Bear of St. Corbinian which appears in the arms of Benedict XVI, in honor of his work in restoring and rejuvenating the traditional sacred liturgy, and also the bear that has long been associated with California and the Californian people, from the time of the “Bear Flag Republic” to the present day.  The cross between his hands represents the Traditional Latin Mass Society’s mission to show forth the Cross of Christ in all its works. The fleury ends of the cross are a reference to the fleurs-de-lys, a symbol associated with the Holy Trinity and alludes to the chastity and purity of the Virgin Mary and of St. Joseph.  The bordure is derived from Spanish examples, with the stars refer to Our Lady’s title as Stella Maris and the scallops being a reference to pilgrimage, and, once again through the arms of Pope Benedict, Saint Augustine and the Holy Trinity.  An escallop also appeared on the arms of the historic Spanish province of Alta California.  The gold and red colors allude to the arms of Benedict XVI, the red, white and blue, to the United States, while blue and gold and red and white also have special significance in the symbolism of California as well.  Black, the color of the bear, may denote humility and turning away from the world.  Blue and white are also an allusion to the Virgin Mary.  The round shape of the shield, while not specified by the blazon, is a reference to Italian examples, and recalls the Italian heritage of the Archbishop of San Francisco and the Reverend Chaplain of the society.  The olive and oak branches represent peace and strength, and are a decorative addition inspired by similar details in an engraving of the arms of Blessed Pope Pius IX.