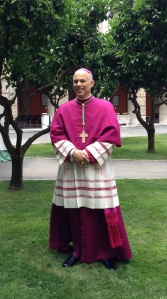 San Francisco, Calif., Jun 17, 2014 / 04:16 am (CNA/EWTN News).- San Francisco Archbishop Salvatore Cordileone has rejected California politicians’ criticism of the March for Marriage, stressing his duty to teach “the truth about marriage” even when it may not be popular.

The June 19 March for Marriage in Washington, D.C., is “not anti-anyone or anti-anything,” Archbishop Cordileone said in a June 16 letter to political leaders, religious leaders, and leaders of LGBT (lesbian, gay, bisexual and transgender) activist groups.

“Rather, it is a pro-marriage march,” the archbishop continued. The march “affirms the great good of bringing the two halves of humanity together so that a man and a woman may bond with each other and with any children who come from their union.”

Archbishop Cordileone, who heads the

U.S. bishops’ Subcommittee for the Promotion and Defense of Marriage, said that if the event intended to “single out a group of individuals and target them for hatred, I most certainly would not be there.”

Their letter asked the Catholic archbishop to “reconsider his participation” in the march. They claimed that march organizers like the National Organization for Marriage and the Family Research Council are “some of the nation’s most virulently anti-LGBT organizations and leaders.”

Archbishop Cordileone noted Pope Francis’ April 11 comments to the International Catholic Child Bureau, in which the Pope said, “We must reaffirm the right of children to grow up in a family with a father and mother.”

The archbishop also affirmed respect for “the intrinsic human dignity of all people.” He said that some of the critics’ comments about March for Marriage sponsors are “based on misinterpretation” or are “simply factually incorrect.”

He said he and the march’s critics have a “common disdain for harsh and hateful rhetoric,” but pointed out that supporters of marriage as a union of one man and one woman have also faced this rhetoric and even harsh action.

“Simply for taking a stand for marriage as it has been understood in every human society for millennia, people have lost their jobs, lost their livelihoods, and have suffered other types of retribution, including physical violence,” the archbishop said.

He rejected violence against persons with same-sex attraction, while also noting the violent attack on March for Marriage sponsor the Family Research Council. In August 2012, a gunman who was also an LGBT community center volunteer targeted the advocacy group, shooting and wounding a security guard before being wrestled to the ground.

Archbishop Cordileone said he is willing to meet with his critics “not only to dialogue, but simply so that we can get to know each other.”

“Please do not make judgments based on stereotypes, media images and comments taken out of context. Rather, get to know us first as fellow human beings.”

“It is the personal encounter that changes the vision of the other and softens the heart. In the end, love is the answer, and this can happen even between people with such deep disagreements,” he stated.

House Speaker Nancy Pelosi (D.-Calif.), a self-identified Catholic from San Francisco, in a separate letter criticized the archbishop’s participation in the March for Marriage. She claimed that the march is “venom masquerading as virtue,” the San Francisco Chronicle reports.

Thomas Peters, a writer for CatholicVote.org and former communications director for the National Organization for Marriage, responded to Speaker Pelosi and other critics of the archbishop.

“(I)t is a milestone for dozens of politicians to tell an American archbishop that he is so wrong about his own faith that he is morally at fault when he acts in the public square in accordance with his conscience,” Peters wrote June 16 at CatholicVote.org.