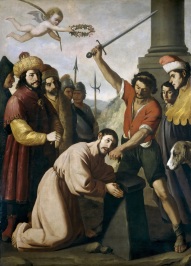 Tomorrow,  July 25, 2016, the Church celebrates the feast of the first Apostle to suffer martyrdom, St. James, the brother of John, the son of Zebedee and Salome (St. Joseph’s niece and St. Cleophas’s daughter), nicknamed by Our Lord, along with his brother, Boanerges, the Sons of Thunder. St. James is called “the Greater” to distinguish him from the other Apostle of that name.

James was one of the most beloved Apostles. It is Peter, James, and John who are privileged to be present at the healing of the daughter of Jairus, the Transfiguration, and the Agony in the Garden. These intimate experiences with Jesus prepared James to become the first Apostle to shed blood for Jesus.

James lived only 11 years after Pentecost. He was probably only 40 years old when

he died. In that short time in the Apostolate, the Son of Thunder went from Jerusalem to Spain and back again. The breadth and rapidity of his apostolic travel, together with his fiery personality revealed in the Gospels, allow us to glimpse the manly heart of this Soldier of Christ. James was wild with love for Jesus Christ and he wanted to proclaim to all the Good News of his Beloved. It is most fitting that James shed his blood for love of Him while still in the prime of his manhood. It is no accident that James would become the model for and patron of the military religious orders of the period of the Crusades. He is even venerated in Spain, where he was especially the patron of the “reconquista” against the Muslims, as “Santiago de Matamoros,” which means, “St. James the Moor-Slayer.”

St. James is a Soldier above all of spiritual arms, of course. In Spain, he received the first Marian apparition, as Our Lady appeared to him on the banks of the Ebro River in Saragoza in the year 39. She was standing on a pillar and told him that the faith of the Spanish people, who were not accepting the Gospel at that time, would become as strong as a pillar. He built a shrine to her on that spot, where the great basilica of Our Lady of the Pillar now stands. After Our Lady’s apparition, James had more success in Spain. So fervent were his Spanish disciples that, after his martyrdom in 44 by Herod Agrippa in Jerusalem, they carried his body all the way back to Spain, where they buried him in Compostela, “the field of the stars.” The body of St. James is one of the great pilgrimage sites in the Catholic world, as thousands of pilgrims for centuries have walked “El Camino de Santiago,” imploring his intercession. James’s feast is a huge celebration in Spain and in many Spanish-speaking countries. At my own parish, there is a vibrant festival kept the whole of next weekend by those who hail from the town of Santiago Apóstol in Oaxaca, Mexico.

St. James teaches us to love Our Lady of the Pillar and to work with her in conquering our own hearts and the hearts of others for the King of Kings. Let us all, at least in spirit, make our own pilgrimage today along the Way of St. James, begging his help that we may make Christ the King of our hearts and that Mary may reign there as Queen. Let us especially ask him to give us a share in his manly chastity, whereby he traversed the world in passionate love for his Beloved. St. James, pray for us as we celebrate your feast day!