At Midnight on Christmas the Traditional Latin Mass Society of San Francisco sponsored a Latin Mass at Immaculate Heart of Mary Parish in Belmont. Father Alvin Yu was the celebrant. He is a Parochial Vicar at St. Mathew’s in San Mateo and Director of Liturgy at St. Patrick Seminary in Menlo Park. He was ordained a priest in 2017. The TLM Society of San Francisco works in the Bay Area to sponsor, foster, and encourage celebrations of the Traditional Latin Mass. Recently, these young people have received proper permission to have Latin Masses at IHM. With the approval of Archbishop Cordileone and with permission of Father Mark G. Mazza, pastor, there will now be at IHM a regular Latin Mass on the first Sunday of each month at 5pm. The next Mass with be on Sunday, January 6th, The Solemnity of the Ephiphany, at 5pm. This will be a Solemn High Mass with choir. The society will arrange approved priests (with a letter of good standing in the Archdiocese) and with the pastor’s final invitation and approval, provide altar servers, and cover any added expenses involving music etc. Fr. Alvin Yu will usually be the celebrant, but there will be other approved priests from time to time. Do what you can to get the word out.
END_OF_DOCUMENT_TOKEN_TO_BE_REPLACED 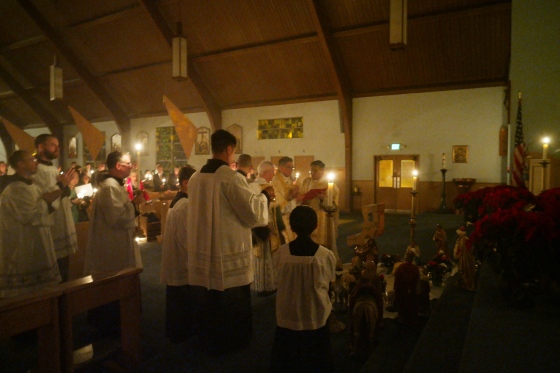 Photos from the Christmas Midnight Mass in the EF that was celebrated by Fr. Alvin Yu can now be viewed on our photo gallery.

Zephaniah 3:14 Shout for joy, O daughter Zion! Sing joyfully, O Israel! Be glad and exult with all your heart.

Luke 3:18 Exhorting them in many other ways, he (John the Baptist) preached good news to the people.

The Third Sunday of Advent and the Fourth Sunday of Lent are traditionally known in the sacred liturgy of the Roman Rite by the Latin first words of their Gregorian Chant Introits (Entrance Chants), which remain even in the liturgical reform as the official opening music for these days. In Advent it is Gaudete, whereas in Lent it is Laetare; both are exhortations to the people of God to rejoice in the Lord. In fact, during the many centuries when these ancient and venerable chants were used exclusively, the congregation would immediately know the occasion not only by the words, but also by the proper music. It told them that the holy season of Christmas preparation or Easter preparation was half over. There is still the custom in many parishes to switch from violet colored vestments to rose colored ones, if these are available, but just for these two Sundays. Clearly, the theme in Advent is rejoicing in the grace won for us by our Divine Lord and Savior, Jesus Christ. Who wouldn’t want to be reborn in Christ?

END_OF_DOCUMENT_TOKEN_TO_BE_REPLACED

Tota pulchra es, Maria, et macula originalis non est in te. Tu gloria Jerusalem, tu laetitia Israel, tu honorificentia populi nostri; You are all beautiful, Mary, and the original stain (of sin) is not in you. You are the glory of Jerusalem, you are the joy of Israel, you give honor to our people.

On the eve of this Solemnity, exactly seventy-seven years ago, the Empire of Japan bombed Pearl Harbor. The next day, President Roosevelt announced that we were at war. He spoke of “the day that will live in infamy.” Thus began our participation in the sad events of World War II, which had already begun in Europe in 1939. We would be at war until the defeat of Japan on August 15, 1945. A whole generation, and indirectly those after, would be formed by these tragic years of war.

END_OF_DOCUMENT_TOKEN_TO_BE_REPLACED

Here’s an invitational poster for the Christmas Midnight Solemn High Mass this coming December 25. A PDF version is also available here to download and print.

Please forward to your family and friends! Hope to see you there!

The Traditional Latin Mass Society of San Francisco is pleased to announce that we are sponsoring a Christmas Midnight Mass in the Extraordinary Form. The celebrant will be our Assistant Chaplain, the Rev. Fr. Alvin Yu, Parochial Vicar at St. Matthew Church in San Mateo and Director of Liturgy at St. Patrick’s Seminary. The traditional Proclamation of the Birth of Christ – also known as the Christmas Proclamation – will be chanted, followed by the procession of the infant child around the church before mass. We are most grateful to the Parish of the Immaculate Heart of Mary and to the pastor, Fr. Mark Mazza, for graciously hosting this special mass. Everyone is encouraged to bring family and friends!

Romans 13:14 Abjiciamus ergo opera tenebrarum, et induamur arma lucis; Let us therefore cast off the works of darkness, and put on the armor of light.
Luke 21:33 Coelum et terra transibunt; verba autem mea non transibunt: Heaven and earth shall pass away: but My words shall not pass away.

At the urging of the Traditional Latin Mass Society of San Francisco, I have agreed to write occasional reflections.

On the first Sunday of Advent the Church begins a new Church year. Once again we begin to come in contact with the central mysteries of our faith. Actually we are invited to respond in faith to God, who lives and loves. We are drawn into His Being. This is not done in a merely nostalgic way, nor in a way that merely recalls events of long past. No, the Church believes that in its Sacred Liturgy what happened then happens now.